Are You A Forgery?

Delivered by Cortez Stegall
October 25, 2020
Home » sermons » Are You A Forgery?

When you’re told “don’t use the Lord’s name in vain,” we think it means don’t use swear words along with God’s name.

But, did you know there’s more to it? Christians can use the Lord’s name in vain without cussing a day in their lives.

Christians are suppose to live a certain way for Christ. If you don’t live in a way that is Christ-like and you tell people that you’re a “Christian”, then you are using the Lord’s name in vain.

God’s name deserves the upmost respect. It’s so important, that when He made it one of the 10 Commandments, the entire world trembled.

When we use the Lord’s name in vain, it’s like a thief committing forgery—unlawfully pretending to be someone that you aren’t.

Names, in general, are important. They can define a person’s character. Be careful how you use (and live according to) God’s name.

God’s Pattern for a Christian Worker 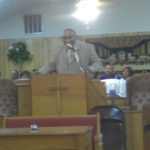